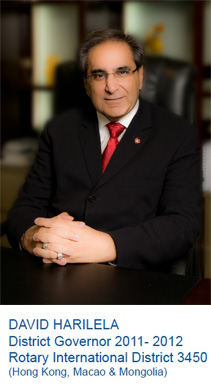 David Harilela, a third generation Hongkonger, has built his career as astute businessman. He paved his own way in the business landscape and now he is the CEO of his own group of several companies (Harilela George Limited and HPZI International Limited) as well as a Director in Harilela Hotel Holdings Limited.

In 1999 David joined the Rotary Club of Kowloon Golden Mile, beginning his lifelong romance with Rotary
Rotary is in the blood of Mr. David Harilela. All his uncles, as well as his father, were Past Presidents of their individual Rotary clubs.  Whilst like himself, his uncle Dr. Hari Harilela was also a District Governor of 3450 in 1965-1966.

His fundraising prowess was shown when he chaired the District Hepatitis B Fundraising project and hosted a movie premiere featuring Jackie Chan’s Tuxedo on October 2002. The event raised over HK$1 million for the project. Press from over 30 countries, including the United States, covered the event, raising the profile of Rotary both in Asia and abroad.

After a few successful smaller Rotary appointments David became District Governor for District 3450 in 2011. He has implemented different PR promotions to arouse others to join Rotary and his year book “Embracing Humanity “is a collection of stories on the “good that Rotarians do “and is an ideal book to introduce Rotary to outsiders and to those interested in joining Rotary. Under DG David, D3450 launched over 100 three meter long billboards on all the MTR stations in Hong Kong for a week and posted a seven meter long banner in Hong Kong International Airport advocating Rotary.  He has also implemented a ”Rotary Caring Partners” scheme which formed alliances with the Junior Chamber of commerce (JCI) , PokOi Hospital, UNESCO, YMCA, CYMCA and Y’s man, etc. The idea being to form ties with other main organizations in the wish that 1 day we could all work together to do a major Project.

David`s work to spread the good Rotary and to give back to Rotarians is unending. In the Rotary year 2013, David was given the position of RPIC (Rotary Public Image Coordinator) for Zone 10B. Also in Rotary Year 2015, David will be named Chair of Global Rewards Member Benefit Program.

David views Rotary as a true non-profit charity where almost every cent raised is given to help others. He believes that because there is never enough money to cure the world’s suffering, all money which can be raised should go completely towards these causes.

In 2015 David officially qualified as an Arch C. Kumph level donor because of his dedication to the mission of Rotary. Service above Self.

He founded an annual International Humanitarian Award-THE ONE, a project by Rotary International Distinct 3450. THE ONE had a very successful first few year and we were very excited to receive great support and publicity, which we trust will continue to grow in the years to come.

PDG David`s Vision for THE ONE is something very simple: To honor the Mother Teresa of Tomorrow, and to be able to make it sustainable for every year. So that we at THE ONE can help the one who helps thousands on a daily basis, to make the world a better place one step at a time.

Comments Off on The Founder